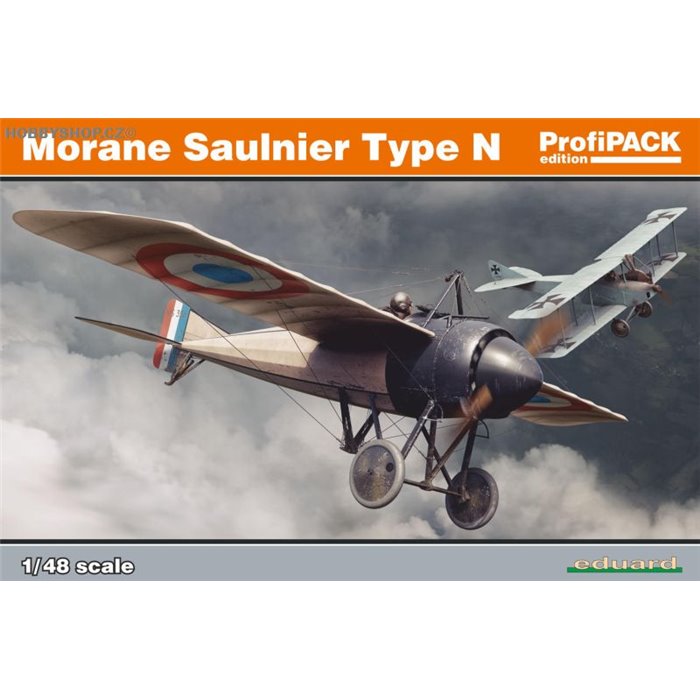 Marking options:
A) MS398, flown by Adj. Jean Marie Dominique Navarre, Escadrille MS 12, France, October 1915
Jean Navarre, a future ace with twelve confirmed air victories flying the Morane Saulnier Type N MS398, came upon a German LVG C II over Chateau-Thierry on October 26th, 1915. The German gunner fired off some 300 rounds with no effect in the combat that ensued. Navarre required a mere eight rounds before damaging the engine of the German reconnaissance aircraft. After the latter set down in French territory, Navarre landed next to it, and the event gave rise to a photo op. The Germans congratulated Navarre on his victory, and were taken prisoner. Not long thereafter, Navarre was transferred to Escadrille N 67, equipped with the Nieuport aircraft. S/Lt. Navarre suffered serious head injuries on June 17th, 1916 in combat, and this cut short his combat career. He died on July 10th, 1919, while practising for a parade fly-by, which was to have taken place on July 14th of the same year.

B) MS394, probably from Escadrille MS.12, France, 1915
Escadrille 12 was formed in 1912, and is known for its use of Nieuport aircraft over the course of the First World War. The unit utilized these aircraft from the start of the war, and, according to French Air Force protocols, was designated N 12 (‘N’ for Nieuport). On February 28th, 1915, it re-equipped with the Morane Saulnier Type N, and the unit’s designation followed suite, being changed to MS 12. These aircraft were not particularly liked, and the pilots gladly traded them in for Nieuport 11s in September 1915. The unit designation reverted to N 12. Initially, the Morane Saulnier Type N flew with the front of the aircraft in black. The same can be said of aircraft that were coming out of licensed production at Pfalz, and for this reason, the Morane aircraft were repainted red.

C) flown by Sergt. Jean Chaput, Escadrille N 31, France, 1916
A native of Paris, Jean Chaput joined the army in 1913 at the age of twenty. At first, he served as a infantryman and to the Air Force transferred in 1914. Initially, he flew with Escadrille 28, where he would attain his first kill, when he forced down a Fokker Eindecker on June 12th, 1915. He was wounded three days later, and after recuperating, he returned to active duty in January 1916, this time with Escadrille N 31, armed with a mix of Nieuport and Morane Saulnier aircraft. Over the course of the war, he would be seriously wounded several more times and he claimed a total of sixteen victories. His life ended in May 1918, while in the cockpit of a SPAD XIII, was shot down by Hermann Becker of Jasta 12, near Montdidier.

D) A.122, flown by Lt. Simpson, No. 60 Squadron RFC, Boisdinghem, France, June 1916
The British, due to a shortage of their own aircraft, expressed an interest in the Morane Saulnier Type N, of which the French side ended up supplying 27. The British called the Bullet. This aircraft was assigned to the Royal Flying Corps on April 24th, 1916, and on the 19th of May of the same year, it made its way to No. 60 Squadron. On June 3rd, Lt. Simpson took off for gunnery practice, and an engine failure immediately after take-off brought about the writing off of this aircraft after only 4.5 hours in the air. Morane Saulnier Type Ns, serving with No. 60 Squadron at this time, carried a red band on the fuselage. From photographs of this specific airplane, though, it is not clear if the band was carried, and so both possibilities are being offered.

E) A.173, flown by 2/Lt. Beauchamp N. Wainwright, No. 60 Squadron RFC, France, August 1916
This aircraft originally served with the French Air Force, but due to British interest in the type, it was transferred on May 30th, 1916, and subsequently assigned to No. 60 Squadron. On August 28th, 1916, it was being flown by 2/Lt. Wainwright, along with two colleagues of his, as a bomber escort for the No. 8 Squadron. Wainwright was last seen attacking German LVG aircraft. On his eventual release, he reported that during his attack, he was hit in the engine, and had to make an emergency landing behind German lines between Baupame and Peronne, where he was taken into captivity.

F) A.178, flown by Lt. Tone H. P. Bayetto, No. 24 Squadron RFC, France, June 1916
As with the preceding aircraft, this example served with the French Air Force, and was transferred to the British RFC at the beginning of June 1916, assigned to No. 3 Squadron. In July 1916, when the Battle for the Somme was in its beginning phases, it was lent to No. 24 Squadron, where it was flown by Lt. Tone Hippolyte Paul Bayetto. After it was returned to No. 3 Squadron, it made its way to No. 60 Squadron, and in September it was disassembled and was shipped to Great Britain.