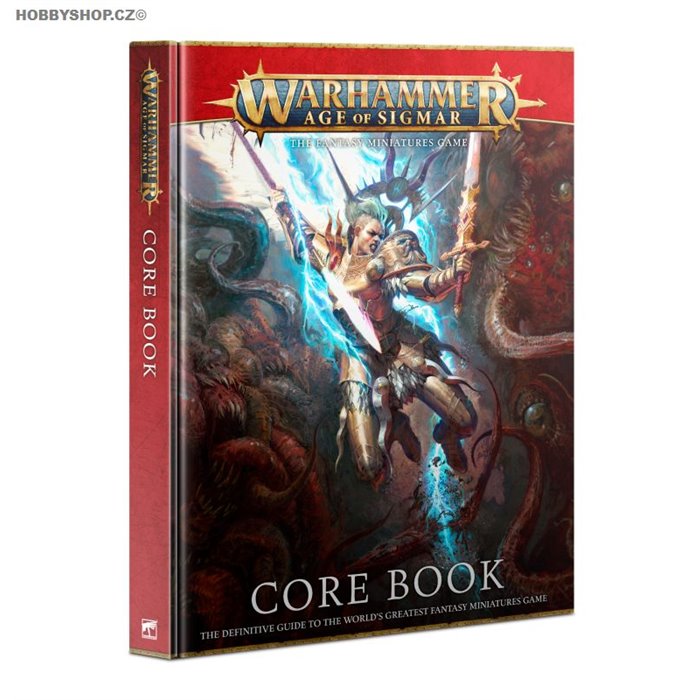 The Age of Sigmar began with the thunderous arrival of the Stormcast Eternals, borne upon the heavenly storm of the God-King Sigmar Heldenhammer. They are great heroes, snatched up at the moment of death and magically reforged – these golden warriors are thrown into battle against all who would corrupt, decay, and destroy the Mortal Realms.

Notify me when available

hile Sigmar and his pantheon of Order strive for prosperity in these dark times, the Great Necromancer Nagash marshals the forces of Death in a bid to claim every last soul for his own. Meanwhile, Kragnos leads the wild forces of Destruction in a savage rampage across the civilised world, all while the Chaos Gods prepare to conquer the last uncorrupted bastions in a world of conflict and upheaval. This is a new epoch, a time of mighty battles and unending war. This is the Age of Sigmar!

The Age of Sigmar is an epic setting populated by myriad armies, powerful heroes, and magnificent monsters. It plays host to vast, realm-spanning wars between the forces of Order, Chaos, Death, and Destruction. In the Warhammer Age of Sigmar Core Book, you’ll not only learn the rich history of this war-torn age, but you’ll also find all the rules you need to evoke these epic stories on the tabletop.

This 360-page hardback book is the ultimate companion for both novice and veteran players of Warhammer Age of Sigmar, containing everything you need to know to collect, build, paint, and play with Citadel miniatures in the Mortal Realms.

The Core Book starts with Realms of War, an overview of the Warhammer hobby with concise how-to guides on collecting, building, and painting your miniatures, as well as the various ways you can use them to play games of Warhammer Age of Sigmar.

Discover the history of the Mortal Realms in the first lore section of the book, containing a detailed, illustrated story-so-far, from the arrival of mankind's God-King to the savage Era of the Beast. This covers three major ages:

- The Age of Myth, Sigmar’s journey through the cosmos, his meeting with the Great Drake Dracothion and his exploration of the eight Mortal Realms. It tells of his awakening of other gods, the building of civilisations, and the fractious alliances that were forged.

- The Age of Chaos, brought about by the machinations of the Chaos Gods and their command of the Realm of Chaos, spitting daemon legions forth and destroying the peace that once reigned.

- The Age of Sigmar, in which the God-King's champions fight back against his enemies in all their forms. From the vengeful Realmgate Wars that cast Chaos back from many Order strongholds, to the cataclysmic Necroquake brought about by Nagash, God of the Dead, to the dawn of the Era of Beasts as the ancient Earthquake God unleashes hordes of rampaging greenskins into the heartlands of civilisation.

Delve into background information on each of the eight Mortal Realms – Azyr, Shyish, Ashqy, Chamon, Ghur, Ghyran, Hysh, and Ulgu – which details their links, descriptions of the native civilisations that have risen and fallen, key events that have taken place and notable geographical features; along with details of the Realm of Chaos, a nightmarish dimension home to the Chaos Gods and legions of terrifying hellspawn.

Learn about the armies and alliances that fight across the Mortal Realms, each featuring a showcase of beautifully painted Citadel miniatures, split into four sections according to their Grand Alliances. Beginning with the forces of Order, you'll glean insight into each of the factions that comprise the last bastion of civilisation in the eight realms (even if they don't always get along), before moving on to parley with their nemeses in the forces of Chaos. Meanwhile, Nagash's alliance of Death plots to claim every last soul in the land, while Grand Alliance Destruction indulges their baser instincts on a roaring rampage of carnage alongside their newfound deity, Kragnos.

The first rules section of this book contains the core concepts you need to start fighting battles in the Age of Sigmar, taking you through deployment, the battle rounds, combat, magic, and more. The rules are laid out in a clear and concise format with additional commentary from the designers, making this the easiest rulebook to reference in Warhammer history.

Once you've got the basics squared away, find out all about the three core ways to play the game and the battleplans you can undertake in each.

Open Play
Let your imagination run wild as open play caters for re-enacting every kind of narrative storyline or tactical challenge you can think of, without restrictions.
– Includes the Open War Battleplan Generator, which provides pre-set Maps, Victory Conditions, Twists, and Ruses.
– Combining different options allows over 1,200 different types of Open War scenarios to be played.

Matched Play
Designed to put both players on an equal footing, matched play offers players an even chance of victory based around points-based army construction rules and a competitive set of battleplans.
– Includes additional special rules, including Stealing the Initiative, as well as rules for additional objectives scored on either a turn-by-turn or end-of-battle basis.
– Features much broader and more detailed requirements and restrictions than other game types, including restrictions on endless spells, reinforced units, and understrength units.

Narrative Play
Send your army on a Path to Glory and watch them develop across games with an overhauled section on narrative gameplay rules. Earn renown, gain new abilities, and even expand your army's territory while free of limitations on how, when, and where you can play.
– Includes rules and guidance on a 5-step process to starting a Path to Glory campaign, including: Choosing Factions and Realms, Starting Sizes and Territories, Orders of Battle, Core Enhancements, and picking Quests to embark upon.
– Provides guidance on how to fight battles against opponents both participating and not participating in a Path to Glory Campaign.

The final section helps represent the vast array of battlefields and endless war that the overlords of the Mortal Realms fight across, including bespoke rules for the various, more niche type of battlefields you may come to fight, on, across, over, or indeed, under.

It includes three variant types of games for players to enjoy, including:

- Siege Warfare – all too often across the Mortal Realms, warlords and conquerors look to displace inhabitants of a territory or city that they have decided should fall under their control, and often the culmination of such a campaign is a brutal, no-holds-barred siege.

- Triumph and Treachery – sometimes duty calls for an all-out brawl between all of your enemies at once, and, when that happens, these rules can be used to represent battles that take place between three or more factions at the same time – all are frantically fighting to win the day against all other opponents, but will you be the one to come out on top?

- Tunnel Fighting – deadly, close-quarters combat is commonplace across the Mortal Realms as armies cluster into labyrinthine cave networks, perfidious skaven skitter through the city sewers, and mind-bending tunnels open up in the unpredictable domains of Chaos.

The Core Book closes out with a handy, alphabetised rules index and a photocopiable Path to Glory roster, Order of Battle, and Army roster.